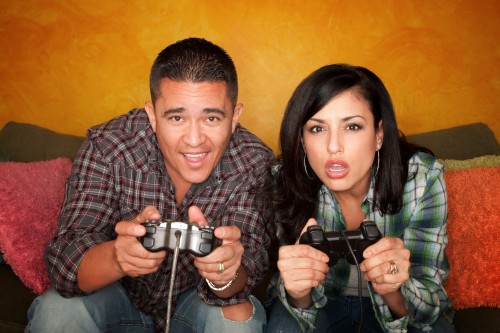 5 Video Games To Play With Your Non-Gamer Girlfriend

As a gamer, you get to explore many fantasy worlds such as in GTA V and Witcher Hunt where to get to complete different tasks and objectives finally moving from one level to another. As a hard core lover of games, the virtual world is the best for you. When you finally get a girlfriend and they are not into games, you may find yourself in a hard spot.

Below are 5 games you can play with your non-gamer girlfriend.

Among the Mario Kart series games, Mario Kart 8 offers endless fun not only to a hard core gamer but also to a non-gamer girlfriend. This is because the game is developed for users of mixed experiences. It is full of varied characters as well as power ups therefore making it an entertaining game. For your non- gamer girlfriend, she will love the wide array of playable characters and various races one can participate in.

This is another exciting game that is suitable for hard core gamers as well a non-gamers. With this game, you don’t have to fear that your new non-gamer girlfriend will find you snobbish or not interesting as well as being full of yourself. Super Smash Bros Brawl provides familiar colorful video game faces which go against each others in various arenas. The game is produced by Nintendo and thanks to their creative minds, there is a character for everyone. Whether you are a hard core gamer looking for a thrill, you have characters like Starfox and Samus. For your non gamer girlfriend, play various characters available.

Legos have provided entertainment since when one was a kid and thanks to technology, a video game is available that is playable by children and adults as well. The game is designed to be light but it has a gripping and simple story which is full of action and puzzles. Whether you are playing as a team with your non-gamer girlfriend or as a single player, you don’t have to put so much effort when playing therefore you will not feel like the non-gamer is dragging you down. Apart from that, the characters are widely known and likeable making it one of the perfect game for a couple.

Hard core gamers love first person shooter games and when you check their collection, you will be amazed by the number of titles that are first person shooter games. Generally, these types of games are known to be tactical and require lots of skills in order to advance from one level to another. To prevent your non gamer girlfriend from getting bored due to the game’s difficulty, you can opt to play a title like Left 4 Dead 2. The game does not have complex levels and you don’t require experienced moves. Your objective is simple, move from A to B.

This game is another first person shooter game that does not have complex levels or require high level skills to play. The game is fun, easy to pickup and its engaging making it the perfect game for playing with your non-gamer girlfriend.

10 Gadgets From Games We Would Love To Own